When it comes to gaming brands, few can match the pedigree of Razer. Built on the ethos of ‘for gamers, by gamers’, Razer has been producing premium gaming hardware for more than two decades, manufacturing everything a gamer needs, from mice to gaming laptops. The superior build quality of Razer’s products paired with its flair for flashy design has allowed Razer to become the industry leader in games accessories.

But it’s not just about the aesthetics. Razer’s products are tried and tested by some of the biggest players in the gaming world, including esports stars and popular streamers. Over the years, Razer has built partnerships with some of the biggest names in gaming, with a roster of brand ambassadors that represent Razer in the highest echelons of their industries.

One such ambassador is Lee ‘Faker’ Sang-hyeok, the legendary mid-laner for South Korean League of Legends team T1. Considered by many to be the greatest LoL player of all time, Faker has been playing professionally for almost a decade, dominating his opponents with his no-holds-barred playstyle. With T1, he has won the League of Legends World Championship three times, earning the MVP gong on two of those occasions. He has also won 10 League of Legends Champions Korea titles and numerous other competitions over the years.

“I like that there’s always a new version and updated performance,” says Faker about Razer’s products. “I’ve been using the DeathAdder for 10 years, so that’s my favourite. It has always been with me, so I feel most comfortable and confident when using it.”

The Razer DeathAdder has long been a staple gaming mouse for esports professionals and hobbyists alike. Designed with best-in-class ergonomics, the mouse fits comfortably in your hand, allowing for extended use in shooters, MOBAs, or RTS games. The wired DeathAdder V2’s secret sauce is its Razer Optical Mouse Switch and Focus+ Optical Sensor which allows it to achieve pinpoint accuracy and superior responsiveness.

The DeathAdder V3 Pro is the wireless version of Razer’s high-performing mouse which has an ultra-lightweight design and a refined ergonomic form. The V3 boasts a Focus Pro 30K Optical Sensor, meaning it’s just as responsive as its wired brethren.

“I believe a mouse that can customise to the exact sensitivity you need is the best,” adds the player. “I try to use my mouse as cleanly as possible. I only use it when I practice and when I compete in tournaments.”

Another big part of Razer’s mission is to empower content creators like Amber ‘PaladinAmber’ Wadham, a Twitch sensation who remains one of the most prominent streamers on the platform. Amber was initially drawn to Razer for its clean aesthetic and authenticity.

“I’ve always been a huge fan of Razer, even prior to us working together,” she says. “It takes a lot for a brand to remain extremely true and supportive to the products it creates, and I love that. The fact that it truly is made by gamers for gamers is one of the most appealing things about Razer – knowing that it’s created by like-minded individuals.”

Amber’s favourite Razer product line is the BlackWidow family of keyboards, which popularised mechanical gaming keyboards when its first iteration launched in 2010.

“I’ve always loved clean and mechanical-looking tech, so my favourites have always been the BlackWidows,” explains the streamer. “There’s just something so nice about the sleek edges! I like reactiveness and sound. I’m a huge fan of clicky keyboards, so I always opt for a more tactical and reactive keyboard.”

To close out our conversation with Faker, we ask for his advice for budding esports pros coming up in the scene.

“It’s important to always strive with passion. Find what you lack quickly, be cool-headed, and be calm,” says the esports star. “Last but not least, use a Razer mouse that fits you.”

But Razer products aren’t just for the hardcore – even beginners can up their game with Razer’s extensive product range.

“I think they’re a great, user-friendly way to get into the scene,” adds PaladinAmber. “Razer has software and hardware that is designed for both experienced gamers, and streamers or beginners.” 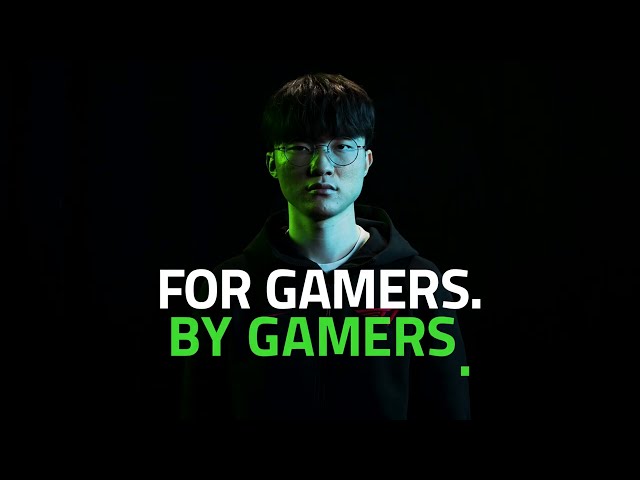 With Razer being known for its slick, futuristic designs, it’s not uncommon for fans to request that the brand branch out into all manner of non-gaming products, from household appliances to automobiles. We couldn’t let our brand ambassadors go without getting their take on what should be Razer’s next outside-the-box endeavour.

Faker goes sci-fi with his suggestion, saying: “Razer-themed colours are very cool, so I think a blaster would look cool!”

To find out more about the #WinItYourWay campaign and explore Razer’s full range of products including mice, keyboards, headsets, and more, head over to Razer.com.

‘Date Me’ Google Docs and the Hyper-Optimized Quest for Love